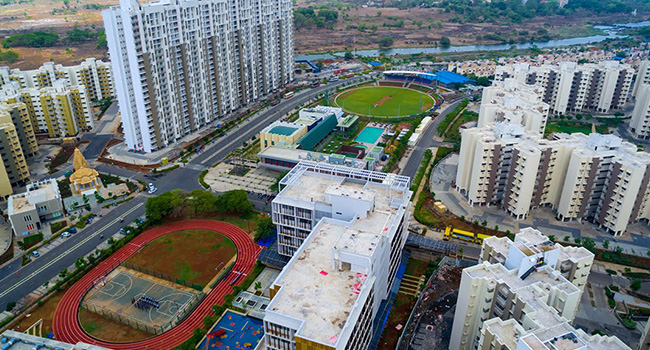 Is Palava the Smart City That India Today Needs?

Consider these scenarios: A completely Wi-Fi enabled city where citizens can connect to work while resting under a tree in their neighbourhood park. A universal ID card that can be used for cashless transactions and also acts as a key to enter your building with advanced security systems. A dedicated mobile app that can be used in a crisis to summon an emergency response team in less than 10 minutes. Sounds like a Hollywood movie with a plot set in the future?

These features may appear to be somewhat futuristic but are already a reality at Palava, a greenfield first-of-its-kind smart city project coming up rapidly on the outskirts of Mumbai. The project’s uniqueness lies in the fact that a real estate developer is developing it, rather than any nodal agency in Urban Planning. With over 25,000 homes sold in 6 years since its inception, the city is planned to be a home to 4 lac families and have 3.5 lac jobs in its business district by 2025.

For Palava, the city developer Lodha Group has a franchise agreement with Maharashtra State Electricity Distribution Co. Ltd for near-uninterrupted electricity supply and solar panels power its street lights. It has a tie-up with General Electric Co. (GE) for 100% flush water recycling, and automated water metering and billing to ensure transparency and zero water loss. The city has also tied up with IBM to incorporate its smarter cities technology using advanced, data-driven systems to integrate information from all city operations into a single system, to improve efficiency and deliver an enhanced quality of life for the residents.

Information technology accounts for only 5% of the total project cost, says Shaishav Dharia, Regional CEO (Palava) at Lodha Group, adding: “The Lodha Group has also set up Palava City Management Association with urban experts and citizens as members to deal with day-to-day issues, as well as a 311 grievance helpline number and 911 emergency helpline number for citizens, and a mobile app. Palava’s smart technology also extends to 500 surveillance cameras that capture real-time data and in future will support facial recognition for entry and have panic alarms every 200 meters. A smart card given to all Palava citizens will allow cashless transactions at retail centres, access to bus service, public Wi-Fi within Palava’s premises, building, and commercial points entry, and information access from the Palava command centre.”

Two operational schools, the Lodha World School and Pawar Public School offer an all established Indian and international syllabi. Shri Ram Universal School (from the stable of “Shri Ram Schools” widely acknowledged as the holy grail of schooling in India) is set to open shortly. “My children and I love to cycle, and we do it just for leisure around the riverside promenade or even to catch the latest movie at PVR at the neighbourhood Xperia Mall! Everything is just a 5-minute ride from my home, therefore, one doesn’t have to rush all the time,” says Tasneem Pithawala, a resident of South Mumbai who bought a golf-course facing villa at Palava in 2013.

The potential for smart cities in India is enormous—something that makes Prime Minister Narendra Modi’s 100 smart cities goal an achievable one. “India’s urban population will reach 590 million by 2030, living in at least 60 cities with a population of more than one million, requiring an investment of $1.2 trillion by the government for their development,” Dharia says.

The Maharashtra State Government has given its nod to the construction of a 21km flyover starting from Kalyan, the first step towards building the Mumbai-Nagpur super highway. In addition to the same, there is 1.7km road tunnel planned to connect Airoli in Navi Mumbai to Shil-phata. And the most recent announcement is that of the 7.5km JVLR-Khoparkhairane-Ghansoli Bridge, to provide a seamless corridor for travelling to Kalyan, Thane, Dombivali, and provide a direct corridor to the upcoming second international airport.

Sharing the plans for the near future, a Lodha Group spokesperson shared that Palava will soon have an Olympic-standard Sports Complex, a Centre for Arts and Culture, 20 schools and much more. While real estate developers often ride the trend wave on impulse, the structured planning and dynamic execution of Palava seems to define the onset of Smart City development in India. Whether this will define the route for others to follow is definitely worth the watch.

This Greenfield project by the Lodha group offers professional sport amenities, recreational gardens and parks and over 60% of open spaces

For enquiries around buying a home at Palava, SMS PALAVA to 52424.