In the faraway dusty North-Western desert of Jaisalmer in India thrive the Merasis, a community that seems to be on the brink of being forgotten in the era of modernization. Merasi is a folk community descending from Rajasthan which is striving to compose, perform and sustain their vibrant musical legacy till date.

The community has carried their unique musical legacy for over 800 years. Even after being deemed as an intangible cultural heritage by UNESCO, the Merasi community continues to yearn for earnest appreciation and a heart-warming applause. A community of about 40,000 people in and around Jaisalmer, the Merasi community had been scorned as Manganiyars (beggars). They were treated as untouchables and did not attain basic rights such as education, political rights and healthcare. Even today, they struggle to be regarded as more than just Manganiyars. For about 40 generations, the Merasi have made a living by singing paeans at the temple of a local Hindu goddess named Bhatiyani, by performing at weddings, child-naming ceremonies and other events. Their music is a particular kind of Rajasthani folk sound that is lyrical and melodic yet full-bodied and vigorous. Originally Hindu, they were converted to Islam in the 17th century by the Mughal emperor Aurangzeb. But the Merasis’ loyalty to the goddess kept them anchored to their Hindu roots, making them one of India’s many contradictions – Muslim by name, and Hindu by custom and occupation, adding to their identity woes.

What makes the Merasi community’s music so appealing to their audience? Their tunes are not just musical notes played together, they have a soul of their own. They reflect their heritage by depicting stories of the community from birth to death and their array of songs are sung on different occasions, from Dussehra to Deepavali and even Holi. This talent and passion for folk music has fortunately found an anchor in Sarwar Khan, a local from Rajasthan who registered the Lok Kala Sagar Sansthan (LKSS) in Jaisalmer (India) to serve as the community centre for the Merasis. He was later joined by the New-York based non-profit, Fold Arts Rasjasthan (FAR), established in 2004 by Karen Lucas. Khan and Lucas work together to provide a thriving and unprejudiced future for the talented yet unrecognized community.

How are they helping the Merasis to keep their dream alive? The Lok Kala Sagar Sansthan (LKSS) and Folk Arts Rajasthan (FAR) have created a special course which caters to both the academic and musical needs of the Merasis. Children who are academically inclined and are exceptional students get chosen to become mentors for other children. Folk Arts Rajasthan (FAR) hosts several gatherings at Lok Kala Sagar Sansthan (LKSS) where they invite children from Jaisalmer and other rural villages to share knowledge, play music together, and work towards empowering the community and increasing their self-worth. They have formulated a series of activities to preserve the Merasi sound. Volunteers and students come together and regularly add recordings to the growing archives housed in New York.

FAR accompanies Merasi to Mumbai for an annual trip where they perform and get to explore the city. This helps them showcase their talent to other people and is instrumental in preserving their legacy. Merasi themselves have created the ‘Merasi Legacy Project.’ Students gain access to stories of their community and record them to compile it into a collection, which is used by them as a source of inspiration for their music.

On the 26th of June, Palava got an opportunity to host these legendary Merasis! The citizens of Palava watched in awe as the musicians showcased their legacy while rendering soulful tunes at the Lodha World School. The love and passion for their music was evident on the faces of the Merasi musicians whose devotion and enchanting renditions mesmerised the audience. There were cheers of appreciation and tears of joy!

The Merasi Musical Concert was hosted by an active Palava citizen’s group called The Renaissance Group. This group aims to form a city community wherein like-minded individuals can enjoy and participate in engaging activities in and around Palava. The sheer dedication and passion of the group members resulted in Palava witnessing folk music at its best.

Even as the Merasi persevere to sustain their music today, their soulful tunes have managed to captivate many across the country but their struggles for basic rights still pose a threat to their dream.

Do you wish to help the Merasi community? You can get in touch with Hanover Wadia, their official Mumbai representative at +91- 9000 494 4333 (mobile) or write to him at: hanoverwadia@gmail.com

To know more about this musical folk group, visit- www.folkartsrajasthan.org and www.merasi.org

Palava Tarang is the city’s cultural festival that brings together some of the most renowned names from the field of art, music, and theater together to Palava. It keeps in mind the city`s vision of promoting various arts and culture initiatives.

‘Palava Tarang’, the festival that celebrates performing arts and culture began in 2015. Last year the event showcased maestros of music, dance, and theatre. The event took place over a period of four weeks and it explored the diverse art forms from across India. Artists such as Padmavibushan Hariprasad Chaurasia and Padmashri Ustad Rashid Khan enlivened the Palava Amphitheatre with their soulful performances.

This year things are a little different at Tarang 2016. The lineup this year includes the Indie rock band Indian Ocean, who are widely regarded as one of India’s foremost indie-rock band along with the folk-rock band Swarathma, who are known to leave the audience enthralled. The show also brings to you one of India’s finest sitarist Niladri Kumar.

As we see a day of incredible performances from some of India`s best-known artists we also see an entire day dedicated to the young ones in the family. To get your kids in a creative mood we have Rob, India’s biggest and most popular kids’ icon conducting his workshop ‘Mad Stuff With Rob’. Meanwhile, to bring back your childhood memories we have an enchanting retelling of Alice in Wonderland in the form of ‘Dastan Alice Ki’. We end the day on a happy note as Story Circus performs Tik Tak Tales, it’s fun Hinglish play which can be enjoyed by people across all age groups.

So, come along to celebrate art, music and our vibrant culture at Tarang 2016. Book your tickets now on bit.ly/Tarang-2016 to have a memorable weekend!

Extending Lodha Group’s commitment towards ‘Building a Better Life’, the Palava team installed an innovative hoarding featuring a funnel tank with a capacity of 3,000 litres, to propagate the idea of rainwater harvesting that can help combat the grave water shortage issues of Mumbai city.

Set up outside Ghansoli Railway Station, the hoarding collected and filtered over 9,000 litres of water in a month, which supported the nearby shops and people passing by the same route. Wherein the rest of the water was transported to water shortage hit areas of Navi Mumbai like the slums of Nerul Darave, where the Palava team ended up supporting more than 50-60 families who used the water mainly for washing and cleaning purposes.

Speaking on this initiative, Viral Oza, Chief Marketing Officer, Lodha Group commented, “At Palava, we work with a focused approach to ensure the well-being of society and keep experimenting to contribute in solving community issues effectively. We have introduced sustainable and creative solutions like rain water harvesting, sewage treatment plants, storm water drainage system and solar plants within Palava to boost the quality of life for all and this initiative has become our first step in serving society at large.”

The focus of this initiative was to deploy a sustainable solution and portray the power of a simple idea that can aid thousands in need. Surviving on water tanks while every year gallon of rain water gets wasted in this monsoon disposed city, this effort helped the slum dwellers survive longer on their corporation water supply. 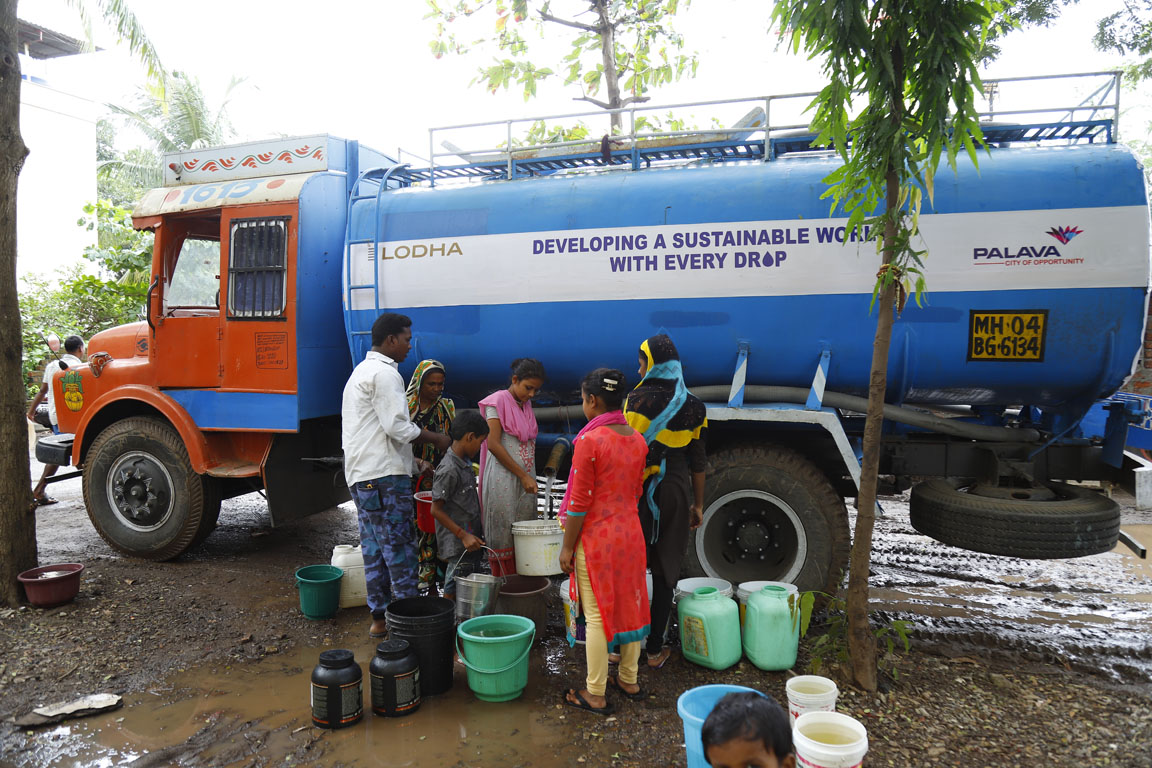 The champions come out to play at Palava Junior League

Palava’s football field became the arena for excitement and fun as the second edition of the Palava Junior League took centre stage over the weekends of 29-30th September and 6-7th October, 2018.

The Palava Junior League is a 7-a-side football tournament that takes place across three main categories- Under 10, Under 12 and Under 14. This year, the championship saw an unprecedented number of teams participating and the ground was packed with cheering parents and lived ones.

Among the 154 of clubs and schools across Mumbai participating in this competition with over 1500 players, The Rising Star took the Under-10 title, while Father Agnel’s took the Under-12 and Braveheart Academy was crowned the Under-14 champions. 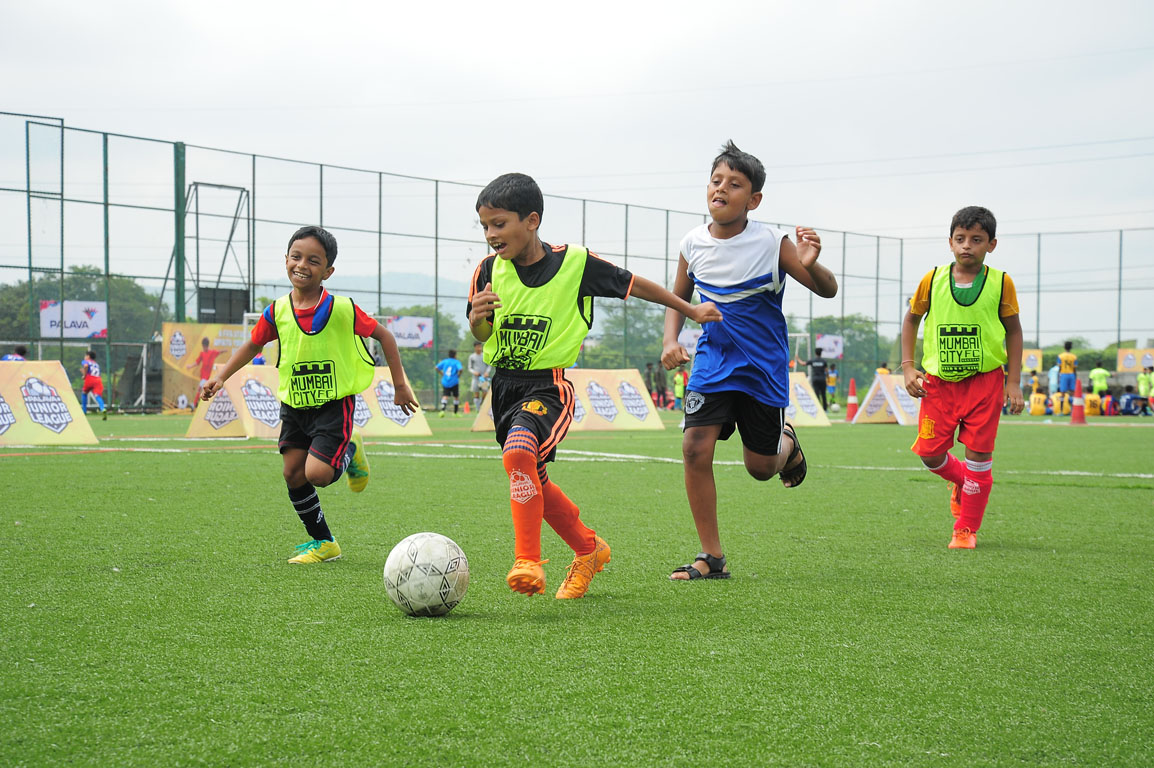 The city welcomes a Green Ganesha

Palava has always been envisioned as a green and environmentally conscious city. To further the same, this year Palava introduced a green Ganesha.

Replicating Mayureshwar of Morgaon, the first among the Asthavinayakas, renowned artist Haribaabu Naatesan created a Ganesh idol made completely of alum. Placed in Xperia Mall for 5 days, the Ganesha attracted shoppers and visitors alike who were seen seeking blessings.

Alum, locally known as ‘fitkari’, is a natural ingredient that is known for its purifying capabilities since the ancient times. The Ganesha idol at Palava, on visarjan, did not pollute the water but in fact cleaned it.

Palava has always been conscious of keeping natural surroundings clean and building new means of sustainability. The Green Ganesha further established the desire of the city to be seen as an environment friendly enclave.

Situated in the economic triangle of Navi Mumbai, Thane and Kalyan, Palava is set to become India’s next metropolis.

Conveniently located, Palava offers effortless connectivity to major business hubs, so that getting to work is always a breeze.

Situated in the economic triangle of Navi Mumbai, Thane and Kalyan, Palava is set to become India’s next metropolis.
Conveniently located, Palava offers effortless connectivity to major business hubs, so that getting to work is always a breeze.