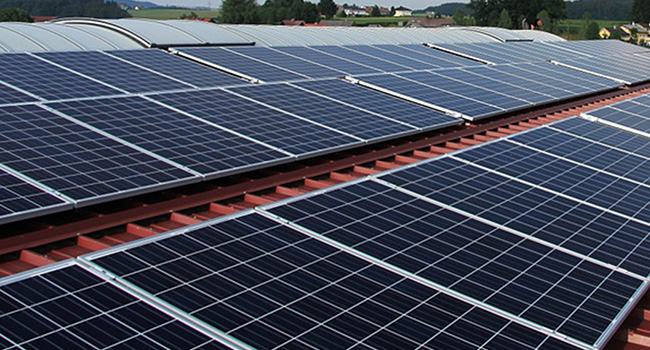 Solar Power Succeeds Through The Roof

Find out how a higher solar power plant capacity of 525 MW and new technology is going to make the adoption rate of solar power go through the roof.

India has an ambitious target of achieving 100 GW solar power capacity by 2022, of which 40 GW is expected to come from rooftop solar projects and the rest from other large and ultra mega solar power plants.

At the Indian Institute of Technology Bombay, a rooftop solar project meets 20% of the power requirement within the campus. In late 2012, Mahindra Solar One, a Mahindra group firm, won a tender to install solar panels on the rooftops of buildings at the IIT at a cost of around Rs.7 crore. Rooftops of 13 of the academic buildings within the campus are now fitted with solar panels. The project has a total capacity of 1 MW and generates 1.5 million units of electricity in a year.

“Our power consumption is so high that whatever capacity of solar plants we put, it is always going to be less than actual consumption at any given time. So, whatever power we are producing, it is consumed in the campus, particularly within the academic areas like classes, laboratories or offices,” said Chetan Solanki, professor in the department of energy science and engineering at IIT Bombay.

Solanki said the institute has been able to save around Rs.75 lakh in power bills since it started using solar power. The total amount of electricity bill it currently pays is Rs.25-28 crore a year.

Others such as the Indian Institutes of Management (IIM) in Ahmedabad and Bengaluru are also looking at installing rooftop solar power plants.

IIM Bangalore currently uses solar power to heat 60,000 litres of water daily in its hostels, management development centre and all staff quarters. It is also used to generate steam for cooking at the hostel mess, where meals for around 1,000 students are cooked every day.

Similarly, IIM Ahmedabad is also looking at installing rooftop solar power plants at most of its new infrastructure within the campus.

Commercial buildings and offices are also plugging into solar energy. Many of the commercial buildings of India’s largest real estate company DLF Ltd, including three shopping malls, have been using solar power for the past three years.

Solar panels installed on the roofs of DLF’s commercial buildings have a total capacity of around 2 MW and can generate an estimated electricity of about 2.5 million units a year. An official of the company said the amount of electricity generated by these solar panels currently makes up only a small portion to its total consumption—in addition, the tariff paid is almost same as grid power.

“However, going forward, we expect solar-based electricity would be cheaper by about 20-25% than grid power. Right now, higher capex has been the biggest challenge so far. But that would soon be over once new technologies come in,” a DLF official said on the condition of anonymity.

Recently, Walmart India announced a plan to install rooftop solar power plants with a total capacity of 5 MW in 15 of its wholesale stores in five states. The company has tied up with Amplus Energy Solutions Pvt. Ltd for the initiative.

Mumbai-based real estate firm Lodha Group is running a pilot project using solar energy at Palava, a 4,500-acre township which it is currently developing in the Mumbai Metropolitan Region. The rooftop solar panels installed in their residential buildings can generate 62,000 units of electricity, which have led to savings of around Rs.10 lakh since 2012.

“The pilot has been extremely successful, we plan to scale up to 4 lakh units (of electricity) by next year and are also evaluating setting up a solar farm,” said Shaishav Dharia (regional chief executive officer), Lodha Group.

Besides, residences, malls and other commercial establishments, office buildings are trying to harness solar energy and bring down the cost of their daily operation. For instance, 60% of the rural branches (around 150) of a non-banking financial company (NBFC) Fullerton India have started using solar power since the past three-four years.

“We are the only NBFC in India that uses solar energy to power our branches, eliminating the need for diesel-powered generator back-up. As of December 2015, the company has saved 116,000 litres of diesel,” said Rakesh Makkar, (executive vice-president and head of urban and rural business), Fullerton India.

The company plans to add solar energy systems at another 36 of its rural branches by the first half of 2016.

While industry experts said the current phenomenon is “just a tip of the iceberg”, it is expected to pick up as newer technologies enter the space and with the government encouraging to use solar energy by providing subsidies and tax incentives.

As per a report by Bridge to India, a consulting and knowledge services provider, the total installed capacity of rooftop solar power plants stands at around 525 MW as of 31st October, 2015. Of the total, the industrial segment uses about 210 MW, followed by commercial and residences with 172 MW and 143 MW, respectively.

“Adoption rate of rooftop solar power plant is somewhat modest at the moment. It is slightly on the slower side as people take time to spare cash or budget separately for this kind of venture. Nonetheless, it is growing pretty strong. Economics are in their favour mainly,” said Kameshwar Rao, leader (energy utilities and mining), PwC India, a research and consulting firm.

Read more of this interesting article on Palava’s website.

Let us know what you think of this article by leaving your comment below.